It was only when I was squatting on a three-meter-high platform on top of a cruise ship which I remembered that I was not a fan of adventure sports.

Or, in fact, any type of sportsman.

It was an unfortunate moment, really, because a nice Englishman had just told me to get off that platform and launch myself on a zip line the full length of the bridge.

It was then that I discovered that even though the flying fox had looked like a relaxing aerial ride from below, in reality it was so fast that I was too upset to even scream. (Watch the moment below.)

RELATED: The surefire way to book a cruise

I just sped off, wide-eyed, until I hit the very end of the line and was pulled back onto the bridge by another puzzled guy.

That’s the thing with cruise ships – you do things you wouldn’t normally dare to do on land. And even if you don’t like it, you have a good story to tell.

I was lucky enough to be on board P&O Cruises Pacific Explorer as it ventured from Sydney to Brisbane – the first cruise ship to sail in Australian waters since COVID-19 ended the $5 billion industry.

As the Captain pointed out as we left Sydney Harbour, it had been two years, two months and 15 days since the last ship had sailed.

It was a joyous and moving occasion, with revelers doing the ‘Nutbush’ on deck as the ship’s whistle marked the special moment.

Now I love cruises and was on one of the last ships to sail Australia in February 2020.

But this was a trip for the real diehards – like Western Sydney’s Mark and Sharon Loveridge, who told me they were on their 25th trip and had another half dozen booked.

However, I was eager to see what had changed on ships since the emergence of COVID-19.

P&O boss Marguerite Fitzgerald says people won’t see too much of a difference.

“For those who have sailed before, you will find that the most important changes are before, the tests and the compulsory vaccinations. But really, once on board, not a lot has changed”, m’ did she say.

READ MORE: The Queen’s brutal response to the call of Meghan and Harry’s photographers

This includes the daring activities that cruise ships like to try and do (I once went on a ship with an ice rink).

I had to prove that I was fully vaccinated against COVID-19 to navigate, by uploading my vaccination certificate to an app called Verifly.

Everyone should be, except a small handful of young children.

I also had to test negative for COVID-19 by taking a rapid test at home, and declare that I had no symptoms.

Then I checked in as usual at the terminal.

The usual lifeboat exercise before sailing was abandoned. You must watch a security video in your cabin, then go to your muster station and check in with your cruise card to prove you know where it is.

While most places on earth have discarded masks, I’m afraid you may need to dig them up again on a ship.

They are encouraged in public spaces, such as when walking indoors, as well as in elevators and theaters.

The ship even has “sip and cover” signs in bars asking people to put their masks back on between puffs of pina colada… but few people care.

As avid cruisers know, cleaning even before the pandemic and sanitizing hands was a big thing on ships, and it’s even more visible now.

If you feel unwell on board, you can go to the doctor for a COVID-19 test. If you test positive, you will be moved to a new cabin to isolate yourself and close contacts such as family.

You won’t be sent to quarantine, however, after the cruise and P&O says you’ll get money back in credit for the cruise days you missed.

However, Mrs. Fitzgerald told me that they had no cases of passengers on board for this first voyage.

“IS THERE STILL A BUFFET?” I hear you cry. Well yes!

The Pantry, as this ship’s casual dining is called (very casual, I even saw people in dressing gowns) has a very tasty one.

However, most food is served by the crew, which is a little inconvenient when you go upstairs for your fourth serving of apple crumble and custard.

Not much has changed at the many other restaurants on the ship, and many had a revamp just before closing, so they look swanky.

They include Luke’s (celebrity chef Luke Mangan himself was on board to make sure everything was running smoothly), delicious fish and meat specialist Shell & Bones (I didn’t order the Lobster Moray as my friends, and I always crave food), and a classic Italian 400 Gradi delight.

As usual, some additional costs, but many are included.

Also, don’t miss an indulgent cocktail made with the hip spirits of Sydney firm Archie Rose at the Bonded Store Bar. The Smoked Negroni comes with REAL smoke…

While there are your usual slightly cheesy cruise shows, P&O Cruises also pushes the boundaries when it comes to entertainment.

Although you have to shell out an extra $20 each, it’s definitely worth seeing sassy magic show The Purple Rabbit and glorious camp entertainer Hans The German (as seen on America’s Got Talent).

And in addition to that zipline, on Pacific Explorer you can “plankwalk” by stepping on a skinny piece of metal above the ocean (way too much for this creepy cat).

Or, you can have your own Titanic moment on the bow. I did, and it was wonderful).

All the other cruising traditions are back, from towel animals – although they’ve been reduced to flannels in my cabin! – and themed evenings.

There’s also a sleek, newly refurbished arcade, as well as the longest waterslide on an Australian ship.

The dedicated crew also deserves a mention. As cruisers know, they really do take a trip, and everyone I spoke to was thrilled to be working again.

My ship was the first to enter Brisbane’s flashy cruise terminal.

It’s out of town in Pinkenba, but that’s not really a problem. P&O offers many tours, or you can just take a free shuttle to BrisVegas.

I headed for a day trip to Tamborine Mountain, the perfect foodie spot, with local operator Southern Cross Tours.

About an hour away, I visited the Tamborine Mountain family coffee plantation, the sustainable cafe Picnic Real Food Bar, and the gin specialist Cauldron Distillery. Its marine-strength coastal gin is sure to have you dancing, at 57 percent alcohol.

There was also a chance to savor the epic views and rainforest walk to Curtis Falls before returning to Brisbane for the sail.

Pacific Explorer has one of the most impressive spas at sea I have seen.

In addition to the usual massages and hairstyles, the Elemis salon offers gel nails and eyelashes and SNS, which is handy if you haven’t had a chance to do them before you leave.

There are also acupuncture appointments, an impressive gym, and even fitness and yoga classes — some are included and others cost extra.

Departures are staggered according to your cabin once the ship docks to avoid those long queues. Masks must be worn when leaving and kept in the terminal.

After that, all you have to do is plan when you’re browsing again. And after being reminded of what a fun, relaxing and carefree vacation cruise is, I’m already on it.

The writer was the guest of P&O Cruises. 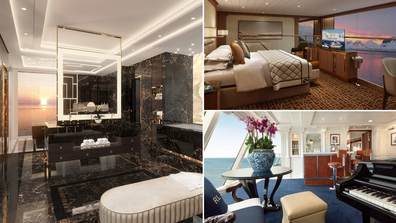 Inside the world’s most expensive and luxurious cruise ship cabins

NORFOLK, Va. — During the pandemic, many cruise lines have been left in the same boat, losing thousands of dollars on trips that never happened. Since April, a new rule better protects passengers. People will now have more rights to refunds if their cruise is canceled or delayed. The new regulations come as so many […]

Royal Caribbean independence of the seas canceled three departures from Port Canaveral in Florida, including two charter cruises that were scheduled to depart on January 14 and 22, 2022. Guests have been notified of the cancellations. independence of the seas Cruise Cancellations The Royal Caribbean cruise ship is not leaving its home port of Port […]

Although the world has seen a two-year hiatus from overtourism issues, they are rapidly returning to tourism hotspots. And, the pandemic has allowed residents of these overcrowded destinations to experience their cities without the usual crowds of tourists, ultimately fueling calls for change. In Barcelona, ​​one of the top travel destinations struggling with overtourism issues […]