“It’s a great tournament with really talented teams, that’s why getting third place is amazing for us,” Barnegat Light Beach Patrol racing team captain said, after The Light scored 19 points. to take third place among 10 teams, including the other five from LBI, on July 26. “It’s a good step towards next week. We are delighted to have taken third place here.

Of course, while the field won’t be quite as deep this Friday, August 5 – and there won’t be a solid group of off-island teams in the mix to steal points from other LBI teams – the BLBP’s finish in Ship Bottom sets up an intriguing match for the island title, considering The Light finished second to six-time defending champion Harvey Cedars by one point a year ago and that this year’s tournament will be held on 22nd Street at Barnegat Light. 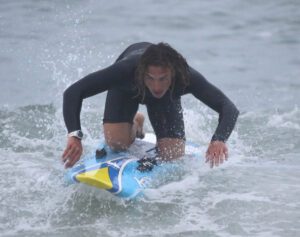 FOCUSED: Barnegat Light’s Hugh Shields has his eyes on the beach as he paddles through stage three of the Ironman Medley at the Ship Bottom Invitational on July 26.

At the Ship Bottom Invitational last week, Brigantine and Lavallette had the most fun, scoring 23 points each, with Brigantine carrying the yardstick for the most first-place finishes to claim the overall title. With BLBP third, Harvey Cedars was just behind in fourth with 17 points – it had been years since the Vikings finished in the top three – and Tommy Smith’s host crew Ship Bottom fifth with 15 points. Surf City took sixth place with 10 points, while Long Beach Township and Beach Haven were ruled out.

“The water was cold, but everyone did okay,” said Smith, sporting a bandage around his head after being hit by an oar during the Row Relay. “You do what you can and you hope to receive the right cards by the ocean. We’re really happy with how we finished. We had some good races, and it’s all about getting better. have fun.

BLBP’s Hugh Shields and Gavin Schulze took advantage of a big wave at the north end of the course during the Paddle Pickup to propel their team to the top of the leaderboard, albeit momentarily.

Harvey Cedars snatched his only first-place points of the night in a wild in-line relay that saw several lead changes. Surf City’s Mark Dileo and Charlie Osborne took the initial lead and beat Brigantine to the beach for the first transition, but Brigantine used a powerful second leg to go out in front, only to have his boat capsize in the waves as he was approaching the beach for the final transition. Despite the incident, Brigantine still pitched first for the third leg, and the Cedars duo of Webster and Townsend gave chase as they headed for the corner marker. 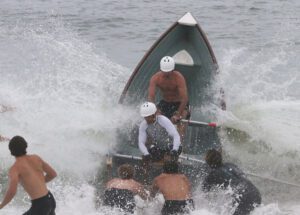 SPLISH SPLASH: Surf City rowing duo Mark Dileo and Charlie Osborne are pushed through the waves in the Row Relay at the Ship Bottom Invitational on July 26.

Midway through the final lap from the marker to the beach, Townsend and Webster rowed Brigantine and leaped through their opposition with 75 yards to go, before Townsend jumped and raced to the finish for first place, pushing the Vikings to a tie with Brigantine at 14. points each.

After Brigantine and Lavallette scored the top two places in the Paddle Relay – Ship Bottom and Cedars took third and fourth respectively – Barnegat Light capped off their effort with victory in the Ironman Medley, in which Brown finished the racing near the front of the pack, Listor put BLBP in the lead on the return swim, and Shields made sure the lead was a solid 60 yards out of the paddle leg. Christian DiAntonio and Stephen Walsh navigated the boat through its 1,000 foot leg without threat.

“With a tournament like this, it’s always important to strike a balance between the players’ experience for the future and trying to do well in the moment,” Westerberg said. “We had a lot of competitors there, and they did their best. This tournament is always exciting because the competition is so good.

If the Harvey Cedars crew were in any way disappointed with their finish, Townsend said nothing.

“The ocean did its thing and we ended up where we ended up,” he said. “We didn’t have our full squad, but we were excited to have some new guards to give them experience against really good competition. We will be ready for the island tournament. The ocean is an ever-changing environment, and we all need to be prepared for all circumstances, situations and conditions, which we will be.

The following day, Ship Bottom was the top performing team on the island of Ortley Beach, taking first place. Smith said conditions at Barnegat Light are quite different from those further south on LBI, but he’s not worried.

“We have a strong team going to BL, and it will be interesting to see what cards we have up there,” he said. “There’s not a lot of surf up there, but we’re good with it. It could be an advantage for us.

Unveiling of a new design for a wind-assisted river freighter

Ship design and engineering company Conoship International Projects said it has developed a new 3,600 dwt general cargo ship suitable for maritime and inland waterway operations, which it says will deliver significant fuel savings and environmental benefits. Equipped with a diesel-electric propulsion system, an enlarged propeller in combination with a ConoDuctTail and optimized hull lines, […]

The littoral combat ship of the navy: on the edge of the abyss?

The US Navy has poured billions of dollars into the Littoral Combat Ship, or what many call the LCS. However, the ships have been riddled with problems for years. What should the US Navy do with it? By the end of World War II, the United States Navy had become the largest in the world. […]

Mixed feelings about the torn masts of Lincoln’s ‘ghost ship’

By Don Redmond Posted on December 17, 2021 at 4:19 p.m. La Grand Ermine in Jordan Harbor at sunrise. Photo: Niagara Region Archives, taken by Paul Cheese of St. Catharines. As Lincoln tried to convince Fisheries and Oceans Canada to leave Jordan Harbor’s famous “ghost ship” as is or to transport its parts ashore where […]