During a ceremony in Rotterdam, the Netherlands, Her Royal Highness Princess Margriet of the Netherlands officially named the new flagship of Holland America Line (HAL).

On board the cruise ship MS Rotterdam, the princess rang the ship’s bell on Monday morning, making the name of the flagship official. Margriet wished the crew and future guests “a good trip”.

Newest MS rotterdam is the seventh ship to carry the Holland America Line name, and the second MS rotterdam baptized by the Dutch princess.

Holland America Line’s newest cruise ship, MS Rotterdam, was officially christened in a traditional christening ceremony in the eponymous city of Rotterdam. The city has played an important role in the history of the cruise line, as it was here that the cruise line was founded in 1873.

Her Royal Highness, Princess Margriet of the Netherlands, performed the ceremonial ringing of the ship’s bell, wishing the crew and passengers sailing on her a safe voyage. Blessing the ship’s bell is a Holland America Line tradition when welcoming a new ship to the fleet.

“When Rotterdam was delivered in 2021, we postponed its christening ceremony so that we could hold it in Rotterdam, because there is no better place to name a ship than in the city whose name it bears. After a few difficult years, we are delighted to celebrate this memorable moment in the history of our company.

The ceremony was attended by senior Carnival Corporation executives and several Dutch dignitaries. After the ceremony, a gala lunch was organized on board for the guests.

A long history of royal denominations

When it comes to royals naming cruise ships, Holland America Line and the House of Orange have a long history together. Princess Margriet herself is an expert within the royal family when it comes to naming and baptizing ships.

It was already his sixth “baptism” for HAL. A quarter of a century ago, Margriet was also the godmother of the previous rotterdam in 1997.

At the time, she was the sixth ship in HAL’s history to bear the Rotterdam name, a tradition that continues today. Her Royal Highness Princess Margriet has also appointed Prinsendam in 1972, New Amsterdam II in 1983, and osterdam in 2003.

Other members of the Dutch royal family who are godmothers include Queen Máxima, for Koningsdam and New Amsterdam. Queen Beatrix served as Eurodamis godmother. Rotterdam V was named in 1958 by Queen Juliana. New Amsterdam II was appointed by Queen Wilhelmina in 1937.

Holland America Line’s newest Pinnacle-class cruise ship will spend the summer in Northern Europe, sailing from its home port of Amsterdam. From there she will make a series of seven- and 14-day cruises to Norway and voyages to Scandinavia, Iceland and the Northern Islands.

The 2,668 passenger, 99,935 gross ton cruise ship has been sailing since October 20, 2021, when it left Amsterdam on a 14-Day Transatlantic Sailing to Port Everglades with stops in Zeebrugge, Belgium, Le Havre, France, Portland, UK, Brest, France and Ponta Delgada, Portugal.

Her current voyage, a seven-day “Rotterdam Naming Celebration” cruise, left Amsterdam on May 29 and will visit Kristiansand, Stavanger and Flåm, Norway.

On October 15, MS Rotterdam will depart from Rotterdam on a 12-night 150th anniversary transatlantic voyage to New York, which recreates the maiden voyage of Rotterdam I in 1872. 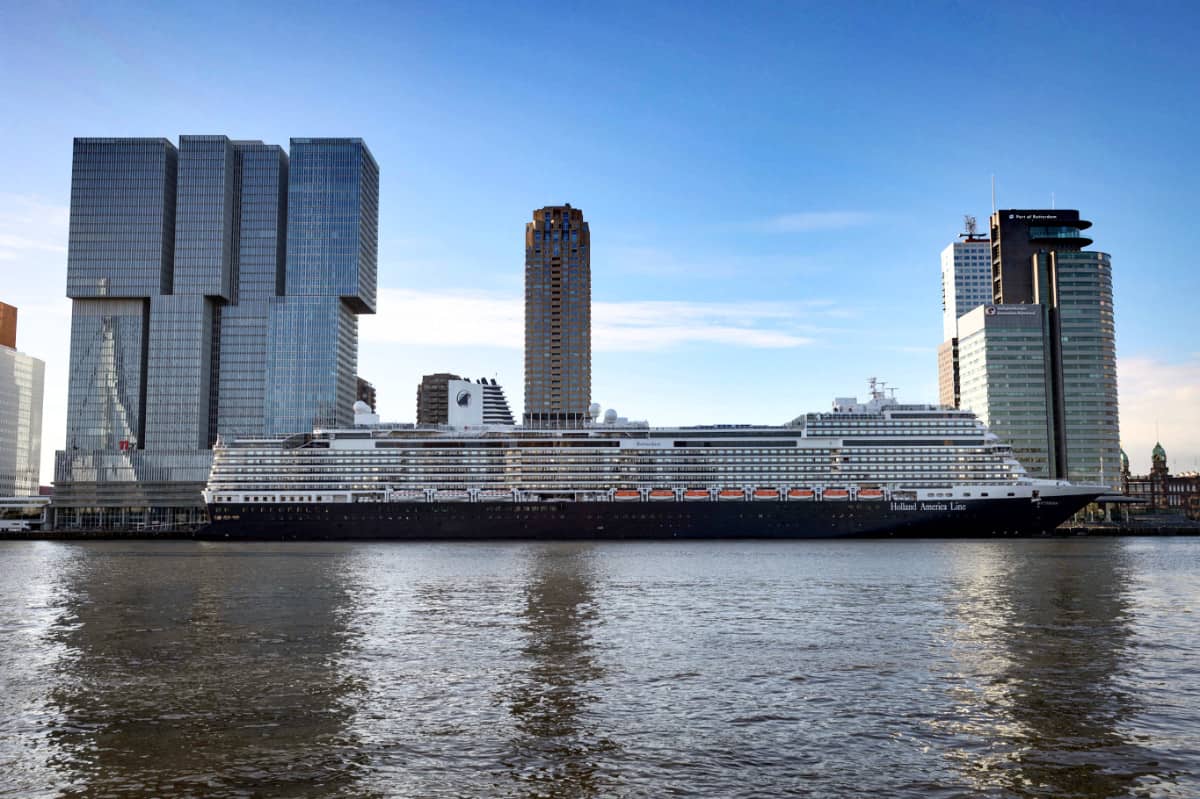 Movable to get a new cruise ship, destinations in 2023

After the Carnival Ecstasy left the Port of Mobile for good in October, city officials will only have to wait about a year for a newer, larger ship to take its place. Carnival Cruise Lines President Christine Duffy announced that the Carnival Spirit would arrive in Mobile on a seasonal basis, beginning in October 2023. […]

Share the article Last update 16 minutes ago With the the largest cruise ship in the world having recently set sail with passengers for the very first time – here’s what those waiting to board wonder of the seas can expect. After reporting a few months ago that the ship was due to launch in […]

Norwegian Cruise Line has confirmed to Cruise Hive that the norwegian sun a cruise ship came into contact with a small iceberg (growler) due to heavy fog while traveling in Alaska. As a result, the ship was forced to skip a port of call and head for Juneau to assess the damage. The 78,309 gross […]