Norman O. Olsen racing his J36 Awesome at the SORC (Southern Ocean Racing Conference) with his daughter Andrea Olsen in 1986

ODETERMINED HAT the measure of a man ? Those who knew Norman Olsen describe him as a gentleman with a kind and generous soul and a loving spirit. He treated everyone equally and with respect, possessing his own zest for life and infectious optimism. “He never met a stranger,” says his daughter Freya Olsen. “He was a man of action whose daily goal was to help change the lives of others for the better.”

Norman Oscar Olsen, a devoted father, lifelong sailor and sports ambassador – with over 100,000 miles of offshore racing experience – died peacefully on February 15 in Belleair, Florida at the age of 91.

Born in Wilmington, Delaware on March 25, 1930, to Oscar E. and Viola (née Pace) Olsen, Norman grew up in Jenkintown, Pennsylvania and Annapolis, Maryland. During his lifetime he has lived in several other parts of the country including Oyster Bay, New York, Chicago, Florida, Northern Michigan and Lake Forest from 1998 to 2015. 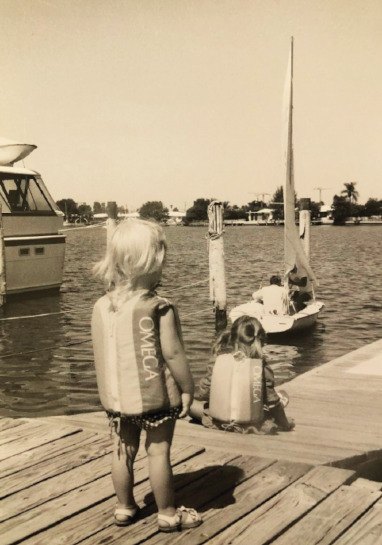 Norman O. Olsen leaves the Clearwater Yacht Club in a 420 sailboat as his daughters Freya and Kirstin look on in 1981

It was during his 17 years at Lake Forest that Olsen left his mark on the community and particularly in the Lake Forest Parks & Recreation (LFPR) Junior Sailing Program. The fledgling program was sold out with little attendance, so Olsen jumped in, pitching to LFPR to revitalize the program. Within five months, Olsen sprang into action, reaching out to community members for donations of sailboats and all the equipment needed to run successful “learn to sail” courses. The program flourished.

“Norman has been a huge support to me,” says Joe Harris, director of Lake Forest Sailing from 2005-2009. a team spirit, a testament to his heritage. 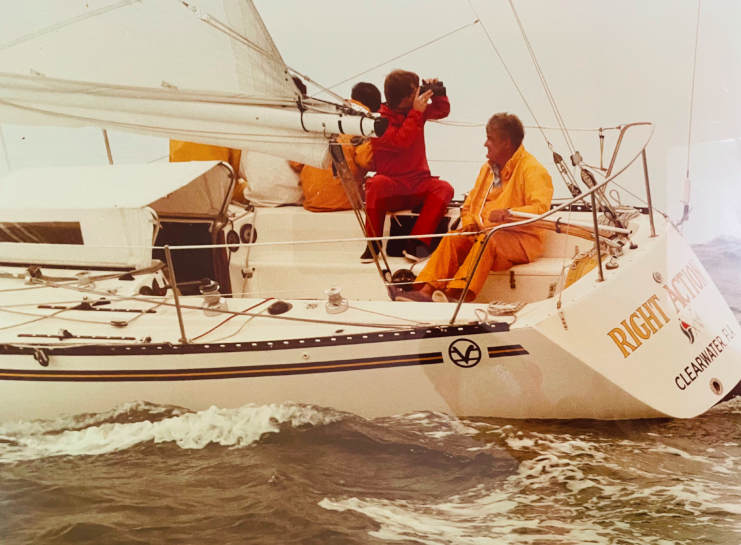 Norman O. Olsen leads his sailboat Tartan Ten Right Action during a regatta in Clearwater, Florida, with his son Rod in red serving as navigator

“Norman has always had a passion for involving people in sailing from a young age, whatever their background,” says Hunter Ratliff, an accomplished sailboat racer and instructor who served as director of Lake Forest Sailing for nearly 10 years. “He created scholarships to encourage those who couldn’t afford to participate to get involved and stay in the sport.”

In 2002, the U.S. Sailing Association awarded Lake Forest Sailing the “Outstanding Year-Round Sailing Program” and the “Outstanding Illinois Park District Program of the Year”. A perpetual trophy in his name, the “Norman Olsen Sailor of the Year”, is awarded to sailors who demonstrate sportsmanship, dedication and enthusiasm for the sport of sailing. 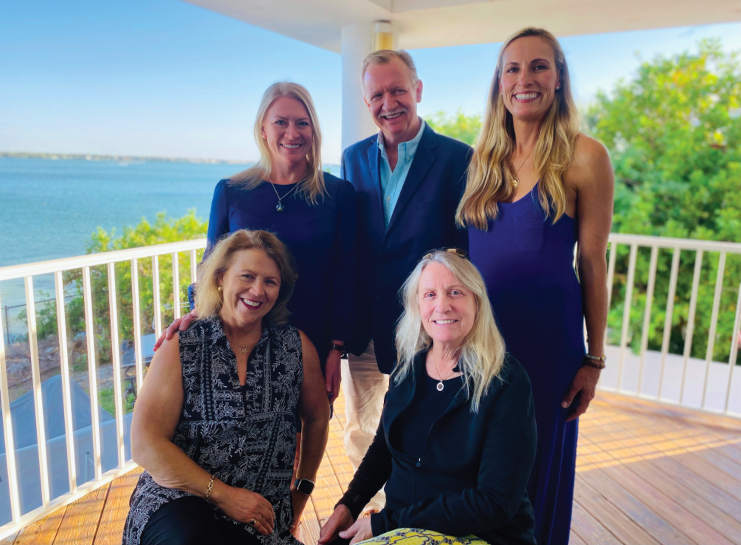 Ensuring the success of the Lake Forest sailing program was more than sailing for Olsen. He was a tireless advocate for character development in young people.

In a 2010 article in Forest & Bluff, Olsen said: “The activity of sailing teaches independent thinking, the development of teamwork and cooperation, the promotion of healthy competitive attitudes and the ability to make quick decisions in the face of adverse conditions. difficult. It is through embracing these positive cultural values ​​that sailing helps young Americans develop into individual thinkers capable of becoming responsible, resourceful, and strong citizens who can and will positively contribute to their future and the future of the United States. United of America.

Olsen’s devotion to youth stemmed from his role as the father of his seven children.

“Anyone who knew my father knew that his greatest source of pride and joy was his children, and he loved nothing more than being a father,” says Freya Olsen. “He was a constant source of love, support and encouragement.” 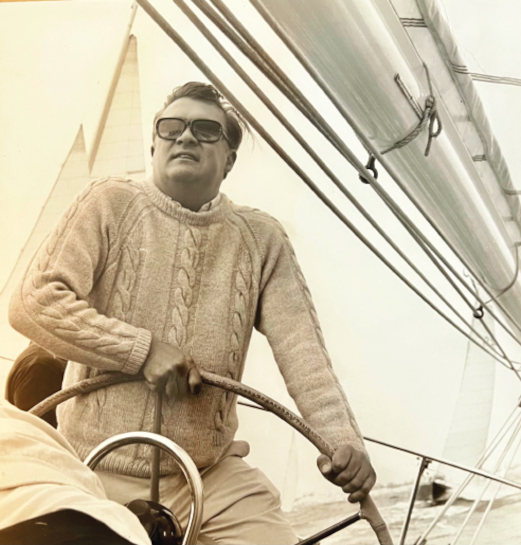 Even in the face of a devastating loss, Olsen chose to carry on. In 1957, he experienced the profound loss of his 4-year-old son (with then wife, Joan), Norman Jr. “Bubby”, in a tragic accident. Amidst a level of grief beyond comprehension, Olsen continued, striving to adopt the mindset of “gratitude rather than grief” that he was called to use at the course of his life.

In 1987 he lost his second wife of 13 years and “the love of his life” Dottie, mother of their daughters Kirstin and Freya, to breast cancer. And, in 1996, he was devastated by the loss of his second oldest daughter, Andrea “Andy” Olsen, to melanoma at the age of 38.

Prior to his success at Lake Forest Sailing, Olsen founded and helped fund the Clearwater Community Sailing Center in Florida, producing three silver medalists at the 1992 and 2008 Summer Olympics and the 2016 Paralympics. 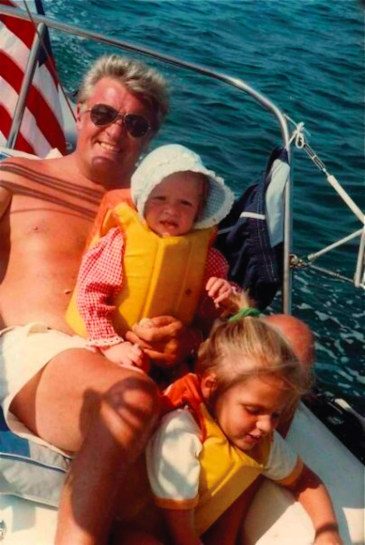 Norman O. Olsen sailing with his daughters Freya and Kirstin Olsen aboard his Tartan Ten, Right Action in 1980

During his career, Olsen worked for the Skipper magazine at first, and Center Press in Chicago years later. In the interim, he spent 15 years as vice president of marketing and sales in product development and promotion. Then, as a specialist in mergers and acquisitions on Wall Street, Olsen found his calling and laid the groundwork for the creation of his own consulting firm, Management Meeting Consultants, Inc. in 1976, serving as chairman until his death. Last year, he realized his lifelong dream of publishing a book, Ronnie is coming home! about his childhood dog and his best friend.

Norman Olsen indeed lived a full life, a life devoted to his family, his friends, his youth, his community and his unwavering love for the sport of sailing. We will miss him.

A local ceremony celebrating the life of Norman O. Olsen will be held at 2 p.m. May 15 at the Lily Reid Holt Memorial Chapel in Lake Forest. For a full obituary, including Olsen’s many sailing accomplishments, visit hubbellfuneralhome.com/obituaries.

Our daughter disappeared during the cruise ship vacation

Cruise ships began returning to Key West two weeks ago, ending a 20-month shutdown due to the pandemic. On a small island with a tourism-dependent economy known for its laid-back and party demeanor, the big comeback is creating enough discontent to draw a downtown protest on a Thursday morning. It’s been just over a year […]

Sandvik is the man behind The Fjords – a company based in Flåm in western Norway – which built the hybrid electric touring vessels Vision of the Fjords (in 2016) and Future of the Fjords (in 2018). Sandvik’s latest plan is for a series of 300 passenger ships, housed in 150 cabins and supported by […]