The first ship-to-ship LNG refueling in China was completed today at the Port of Shanghai. The refueling operation was part of a long-term agreement with the French group CMA CGM and was part of China’s efforts to improve the competitive position of the world’s largest container port in order to meet the needs of the new generation of large container ships.

The new vessel of the CMA CGM Group, the 154,700 dwt CMA CGM Symi was recently completed by Hyundai Samho Heavy Industries as part of a class of 22 LNG-powered container ships being built for the Eastern Pacific and operated by the French group. The container ship, which is 1,200 feet long and has a capacity of 15,000 TEUs, arrived at Yangshan deep-water port, part of the massive Shanghai port complex. The refueling operation lasted approximately 10 hours and loaded approximately 7,000 cubic meters of LNG, while container loading operations were also underway. The ship left Shanghai today, March 15.

With the completion of this joint project, our group is the first shipping line to tap LNG into China and the first to offer full LNG-fueled container service between China and the West Coast of the United States,” said Rodolphe Saadé, President and CEO of the CMA. CGM Group. “By expanding the network of world-class ports offering LNG services, this bunkering marks an important step in the energy transition. 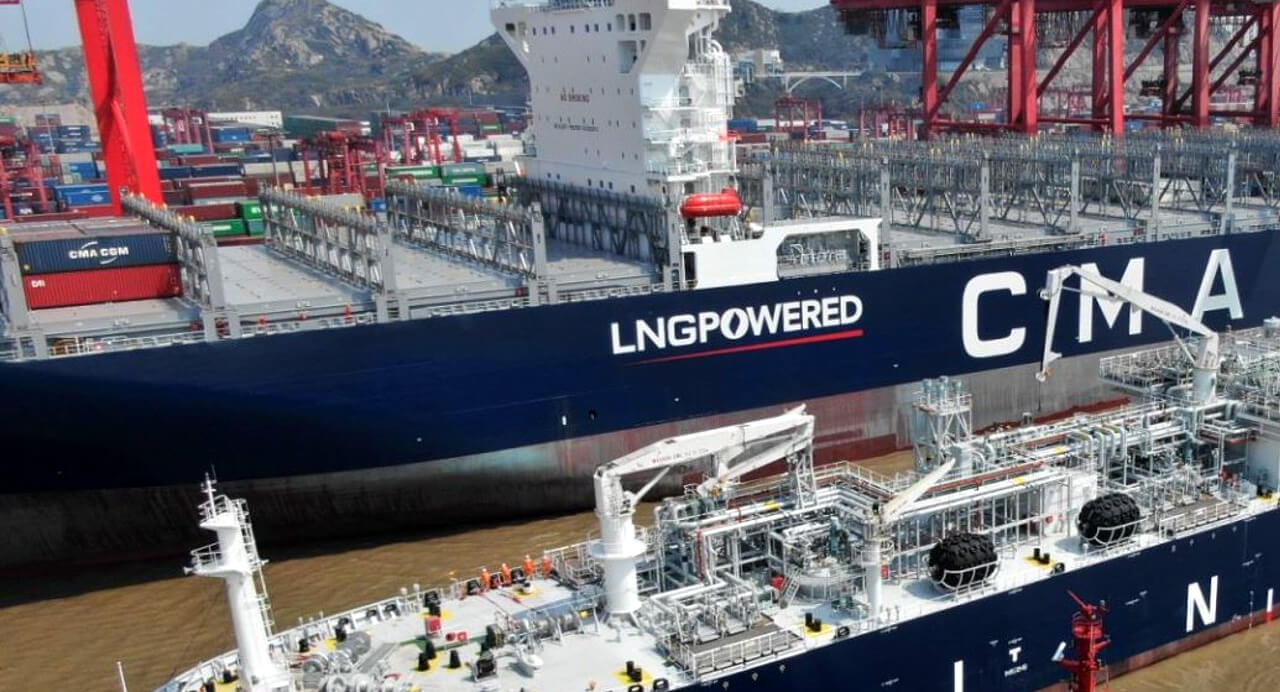 China has taken several steps to make this new service possible. Regulations were put in place and came into effect on March 1 to allow the Lin-gang Special Zone (Shanghai) Free Trade Pilot Zone to start LNG bunkering operations as a pilot program for international ships.

In January 2022, Avenir LNG announced that it had agreed to sell its first 20,000 m3 LNG bunker vessel, the Future Allegiance in Shanghai SIPG Energy Service Co., a Chinese joint venture between Shanghai International Port Group and Shenergy Group, responsible for delivering bunker LNG to CMA CGM container ships. The vessel, which is one of the largest LNG bunker vessels currently in service, has been renamed Haigang Weilai and will now operate full-time from Shanghai.

China has also established a series of rules guiding the operation of the LNG bunker vessel to govern its safe conduct in the busy port. A safety zone of approximately 500 feet is maintained on each side of the supply vessel and vessels are required to stay at least one nautical mile ahead of the supply vessel and half a nautical mile behind the vessel when it is road.

Shanghai port officials said the establishment of the new bunker service was part of their efforts to improve port services and boost the port’s overall competitiveness. They noted that they had implemented other green initiatives, including a transition from heavy fuel oil to diesel and the provision of cold ironing capabilities. They noted that the introduction of LNG bunkering for international vessels puts the port on a par with Singapore and Rotterdam as major international container ports with LNG bunkering capabilities.

CMA CGM has signed a 10-year agreement with the port of Shanghai to ensure the supply of LNG to ships on the line. New CMA CGM Symi sails between China and the United States and is part of the carrier’s plans to introduce 44 LNG and e-methanol ready vessels by the end of 2024. They currently have 24 of these new vessels in service.

The number of cruise ships is now limited, but opponents want the measures to go further. 22-04-2022Archive the Platform Against Mega Cruise Ships renews its opposition through a campaign on social networks which stresses that “this type of tourism is not sustainable”. Institutions and the public, the group insists, must limit cruise tourism, given its […]

The Global cruise ship expedition market The report emphasizes on a detailed understanding of some crucial factors such as size, share, sales, forecasted trends, supply, production, demand, industry, and CAGR to provide a comprehensive perspective of the overall market. In addition, the report also highlights challenges hindering market growth and expansion strategies employed by leading […]