The sister ship of the Russian missile cruiser sunk by the Ukrainian Navy has left its position in the Mediterranean Sea after six months, USNI News has learned.

RTS Marshal Ustinov (055), sister ship of the former RTS Moscow (121), crossed the Strait of Gibraltar on Thursday after operating in the Mediterranean Sea since early February, according to ship spotters. Shortly after passing through the Atlantic, two American guided-missile destroyers assigned to the Harry S. Truman Carrier Strike Group, USS Cole (DDG-67) and USS Bainbridge (DDG-96), followed the Russian cruiser two hours after passing the Rock of Gibraltar, according to photos released by ship spotters. The cruiser was one of Russia’s main naval assets in the region and reduces Moscow’s presence closer to Ukraine.

Ustinovas well as the other two Slava-class cruisers of the Russian Navy – the Moscow and RTS Varyag (011) – were brought out of their homeports earlier this year in conjunction with the Russian ground invasion of Ukraine.

Ustinovwhich is part of the Russian Navy’s Northern Fleet, entered the Mediterranean in early February leading a surface action group and settled off the southern coast of Crete while the Varyag operated closer to Syria and the Russian logistics base in Tartous, USNI News reported at the time. 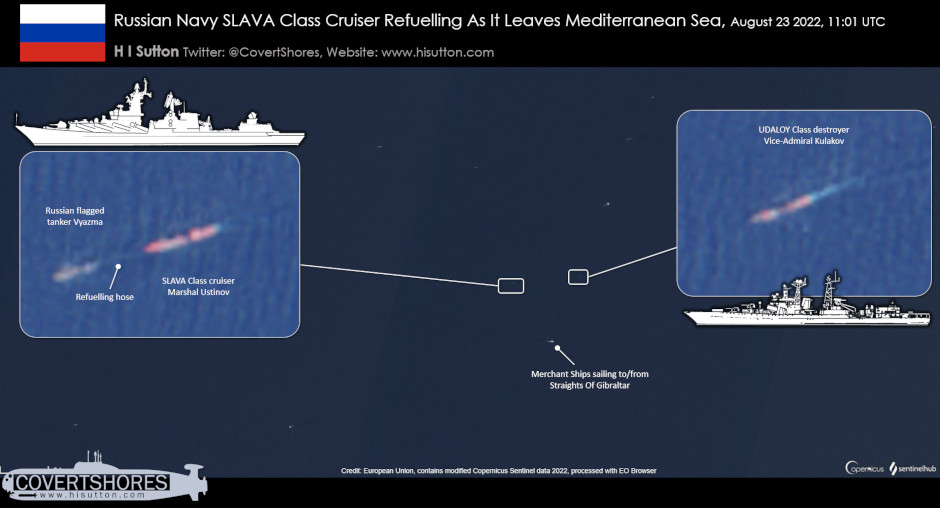 Deployments occurred alongside NATO and U.S. presence operations centered on the USS Harry S. Truman (CVN-75), its escorts and its embarked air wing. Truman has been in the Mediterranean since December and its air wing has flown up to 90 sorties per day.

Designed in the 1970s to take on American aircraft carriers armed with 16 telephone pole-sized SS-N-12 Sandbox anti-ship cruise missiles, the Slava-class ships became part of the Russian fleet after the end of the cold war.

Two Ukrainian Neptune anti-ship guided missiles attacked and sunk Moscow in April. USNI News reported in May that the cruiser likely sank because her point defense radars were not operational.

While the United States has an extensive logistics footprint in the region, resupplying and refueling Russia has been more difficult, according to USNI News contributor HI Sutton.

“The Russian Navy does not have significant maintenance facilities in the Mediterranean. We can assume that crew fatigue due to longer periods of increased preparation may be a factor”, as they departed, he wrote.

Truman has been deployed for eight and a half months.

Share the article Last update 16 minutes ago With the the largest cruise ship in the world having recently set sail with passengers for the very first time – here’s what those waiting to board wonder of the seas can expect. After reporting a few months ago that the ship was due to launch in […]

Passengers say the crew’s response has been chaotic. SEATTLE — Passengers on a Carnival cruise ship that docked in Seattle on Tuesday say more than 100 people aboard the ship tested positive for COVID-19 and the ship was submerged. Several people are saying right now that they are in Seattle-area hotels quarantining after testing positive […]

Iran will launch its first cruise ship in the Persian Gulf port of Bushehr in the very near future. A first liner sailing under the Iranian flag should be launched very soon with routes that cover the main ports of the Persian Gulf and the Arabian Sea. Iran’s Ministry of Tourism (MCTH) will launch the […]