Royal Caribbean’s newest ship, Wonder of the Seas, is the largest cruise ship ever built and the cruise line’s fifth Oasis-class ship. The ship is six times larger than the Titanic and carries up to 9,300 passengers and crew.

I recently had the opportunity to join the maiden voyage as a guest of Royal Caribbean to experience all that this new cruise ship has to offer. What’s on the World’s Largest Cruise Ship? Here are some of the items you will find on this ship:

What were my first thoughts after leaving the ship at the end of the week? It may be the perfect cruise ship for families and for those who want the experience of a mega cruise. 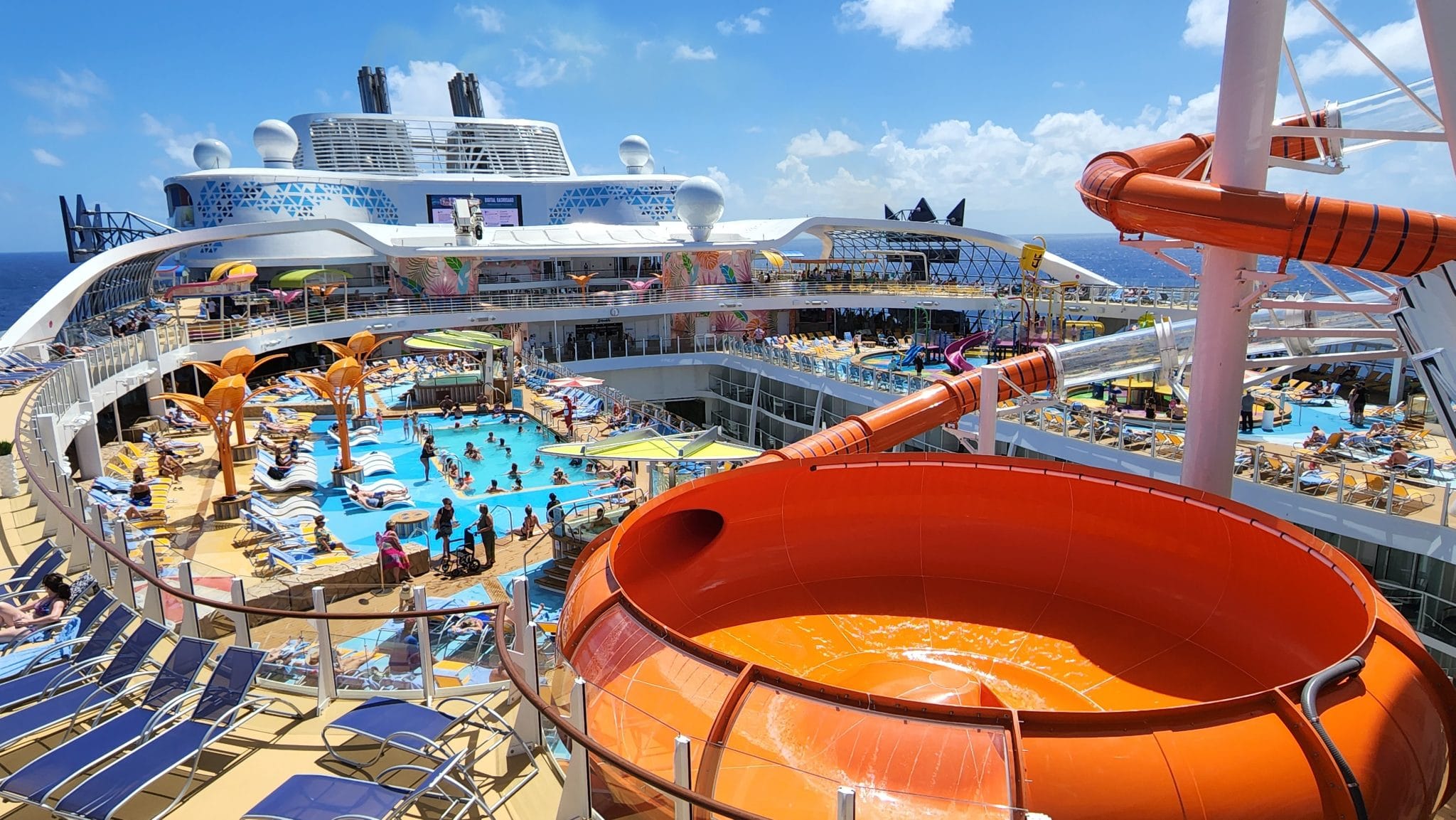 Here are my thoughts and review of Wonder of the Seas, the largest cruise ship in the world.

Embarkation/Disembarkation – This is one area where Royal Caribbean really stands out from other cruise lines. Boarding was a breeze, even though over 4,000 passengers were boarding the ship that day. Since I had an early flight to FLL, I arrived at the terminal a bit early. Because of this, there was maybe a 10 minute wait after check-in before you could board Wonder of the Seas.

As long as you complete the check-in process through the Royal Caribbean app, you should proceed quickly to boarding.

Disembarkation was quicker than ever and I took all my luggage myself. I think I went from ship to curb in about 5 minutes. I literally never stopped walking from the moment I scanned my card to get off the ship until I was outside the terminal. The new machines that scan your face for customs have really eliminated most of the lines when getting off the ship.

Cabin – I stayed in an ocean view balcony cabin on deck 6. I loved how many power outlets the cabin had, including on either side of the bed. Overall the cabin had everything I needed for a week long cruise and I had no complaints about it. It was clean, comfortable and spacious (for a cruise ship cabin).

You can watch a short two minute video tour of my cabin below:

Crew – On each maiden voyage, there are always a few hiccups since the staff is on a brand new cruise ship. However, I can’t say enough good things about the staff at Wonder of the Seas. Several of them remembered my name from day one and I was always greeted with a friendly smile and hello.

A new restaurant that Royal Caribbean has added to Wonder of the Seas is The Mason Jar Southern Restaurant. Tried this new hot spot for brunch and it was my favorite meal on the cruise as I love southern food and comfort food. You can see the brunch photos and menu below. Everyone at our table was delighted. 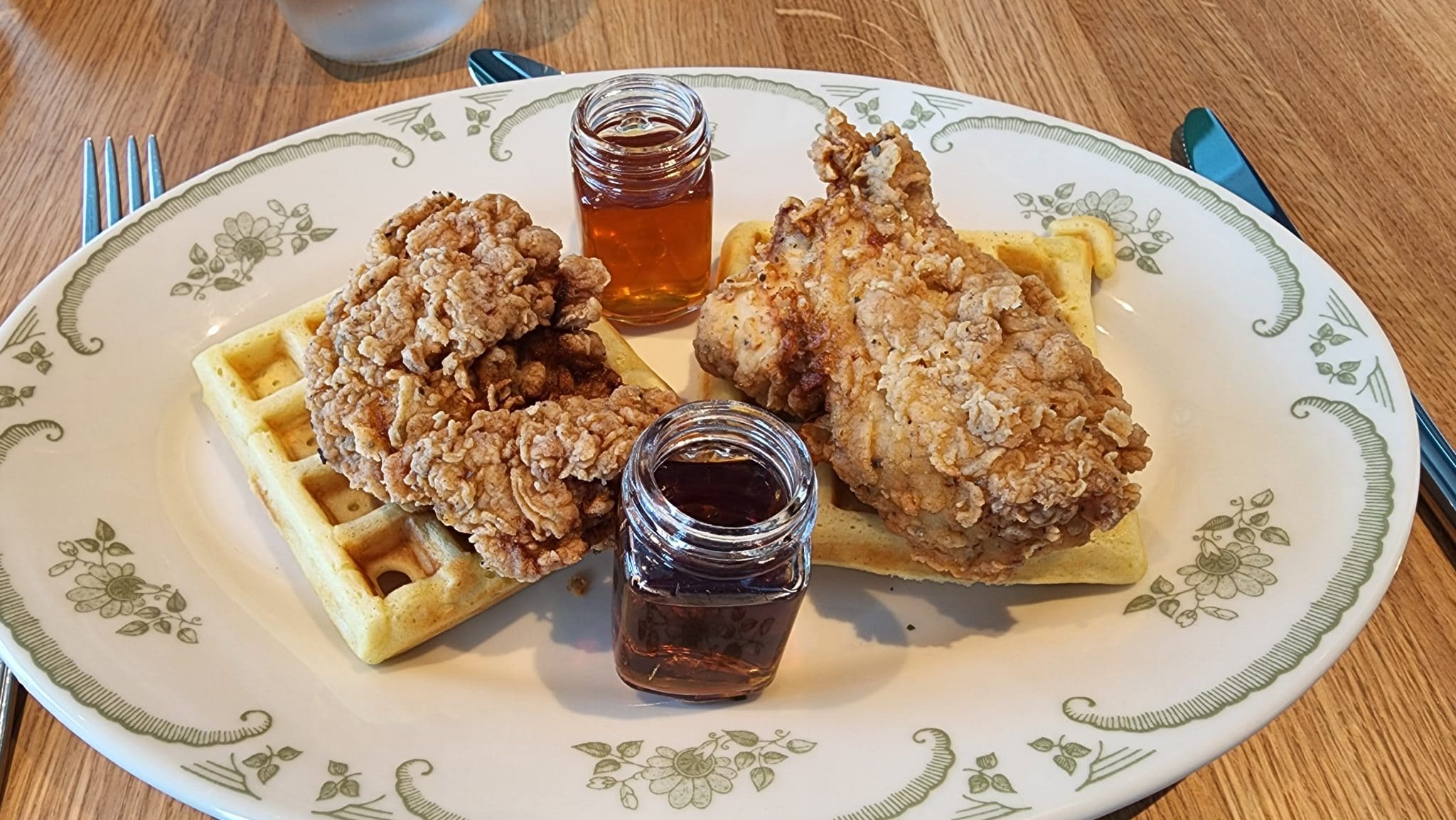 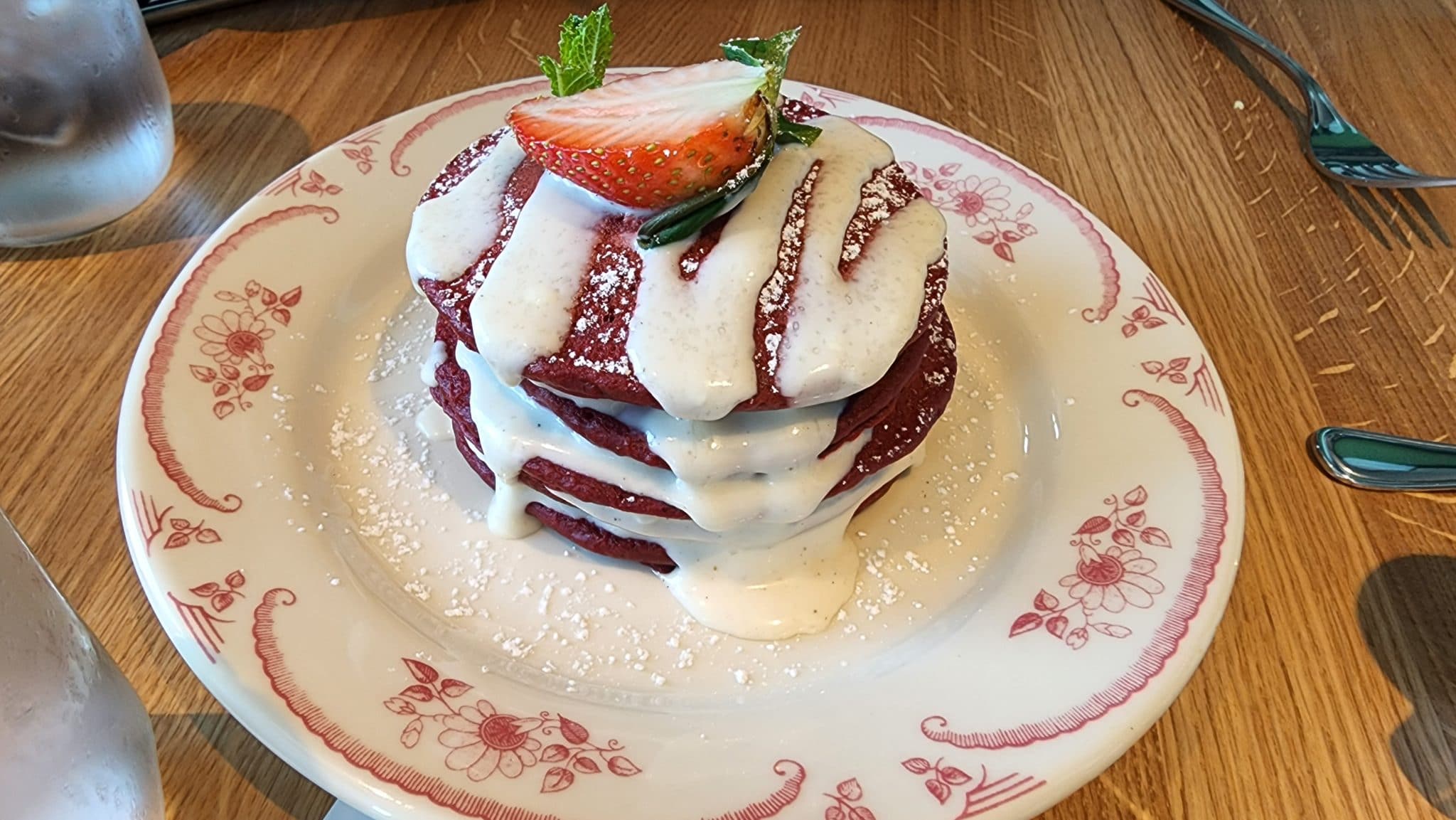 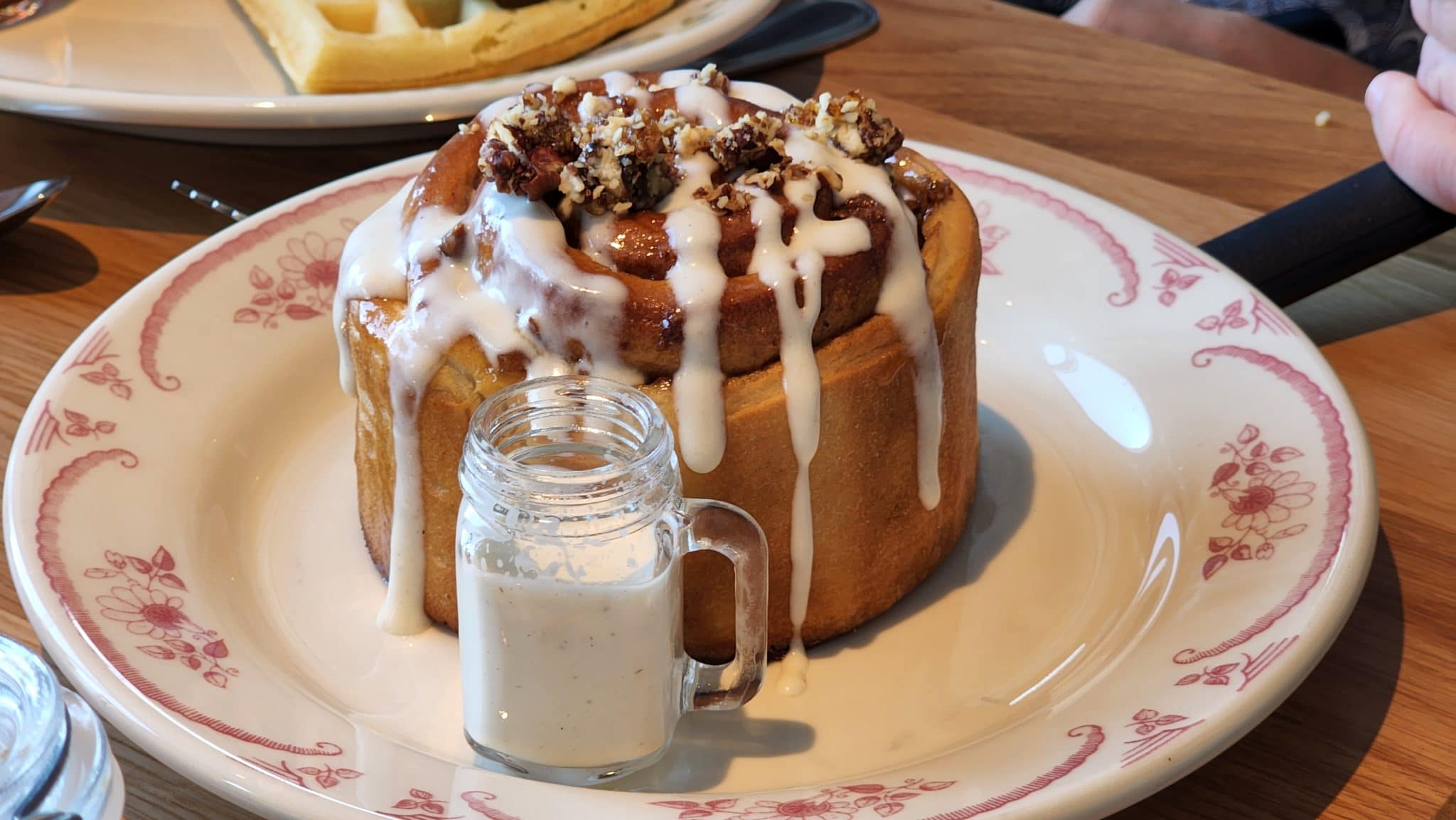 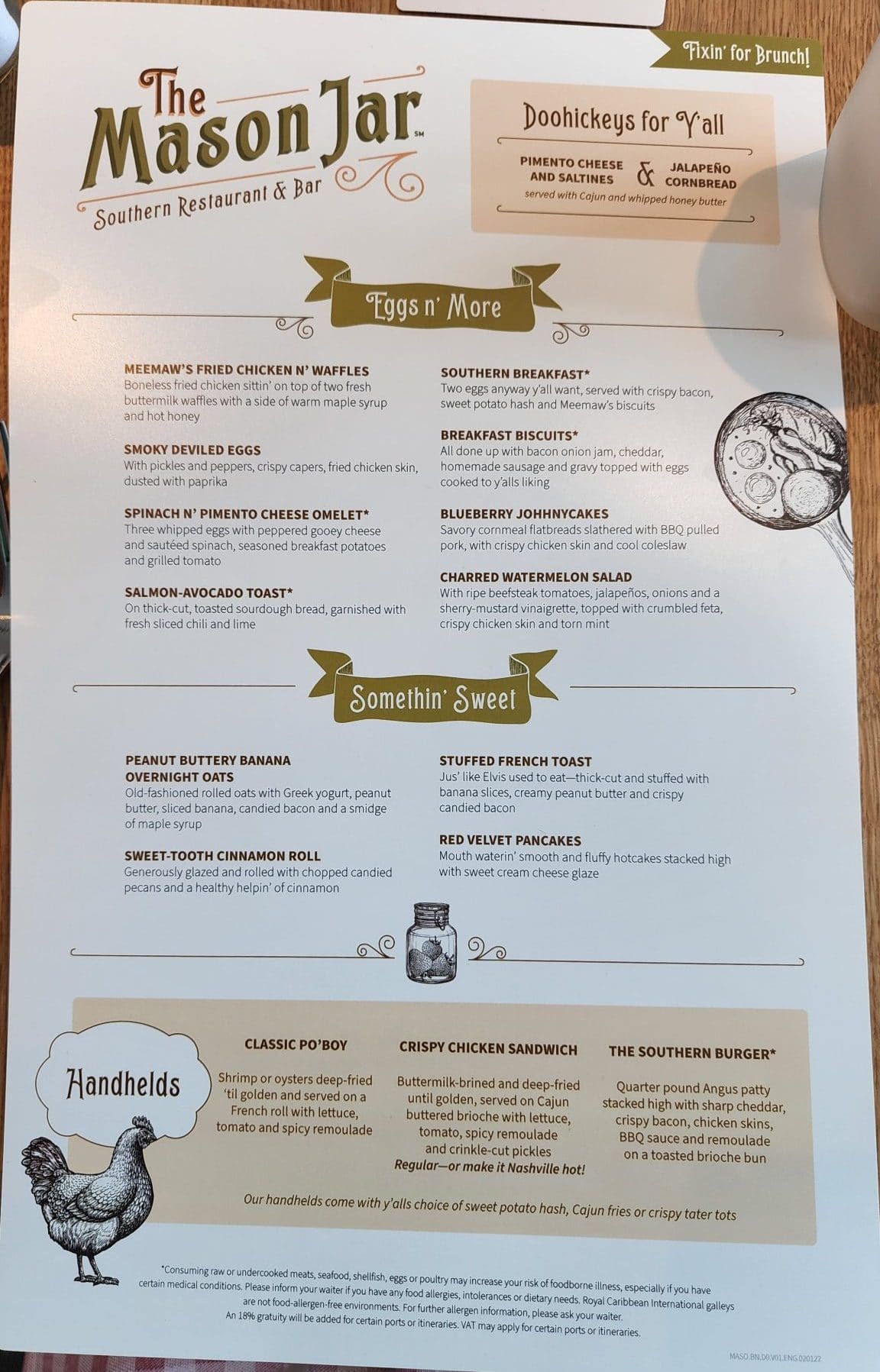 There’s also Chops Grille (steakhouse), Hooked (seafood), Izumi Sushi and Teppanyaki, Giovanni’s Italian Kitchen, Wonderland (a truly unique dining experience), and 150 Central Park. I ate at 150 Central Park on the first night of the cruise and it is the ship’s upscale specialty restaurant. I thought the food was good but the portions were a bit small for the extra price. Loved the Central Park setting.

Boat – Yes, Wonder of the Seas is the largest cruise ship ever built. We cruised at about 75% capacity and the ship never even came close to feeling like I was crowded. I have sailed Oasis class ships at full capacity before and always felt the same way. Even though the ship carries over 6,000 passengers, there are so many public places that you never really feel crowded unless a show is coming on. 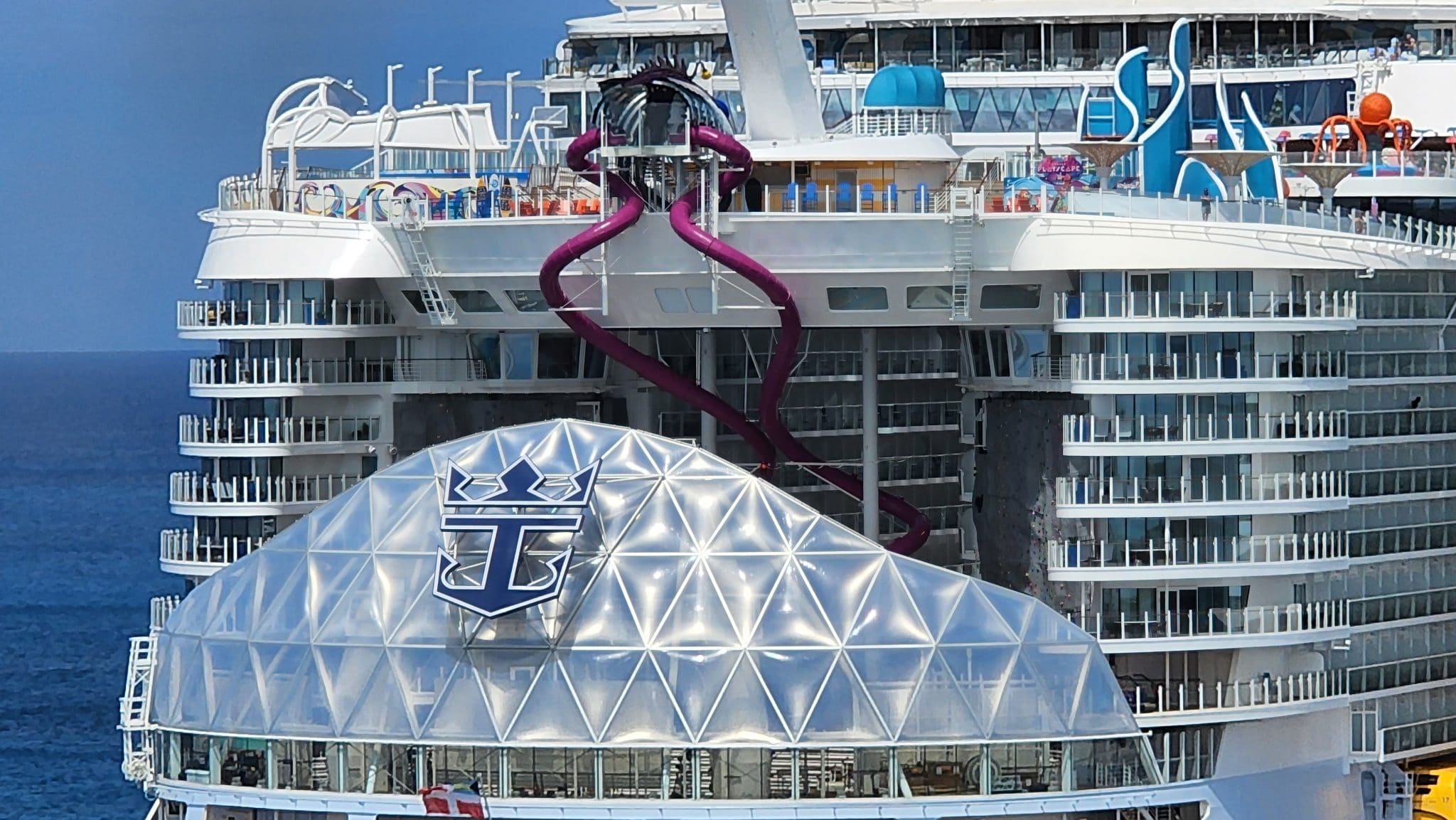 Family area – Royal Caribbean added something I had never seen before on a cruise ship. Instead of one of the Flowriders, they have a new family play area where parents can play with their children. It’s an unsupervised area but something I would really enjoy if I was cruising with my family. 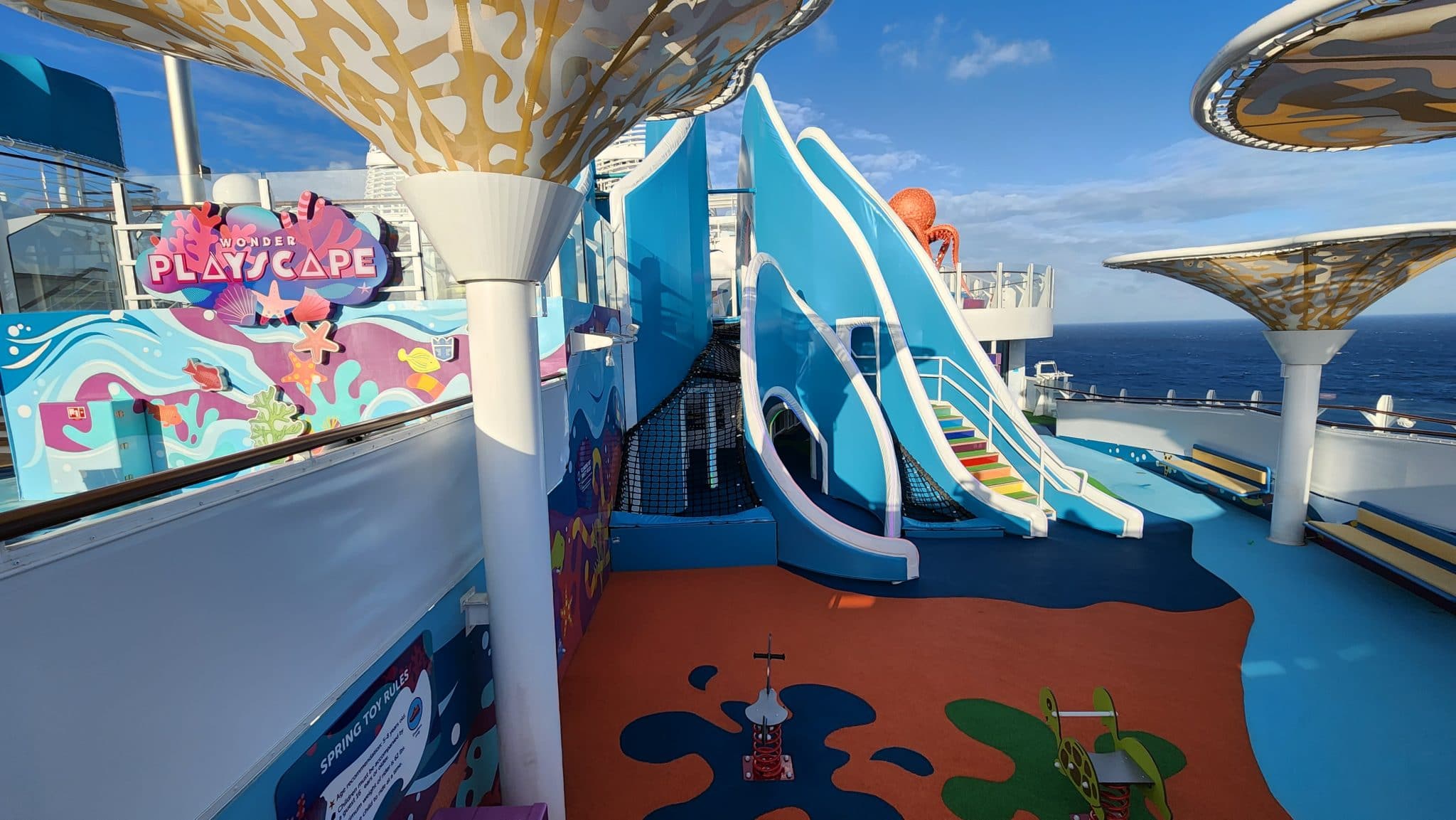 Solarium – The solarium at the front of the ship has quickly become one of my favorite places on board. I really like how Royal Caribbean has completely closed off this area so you can enjoy it whatever the weather. They can heat it when it’s cool and turn on the air conditioning when sailing to the Caribbean in the summer months. 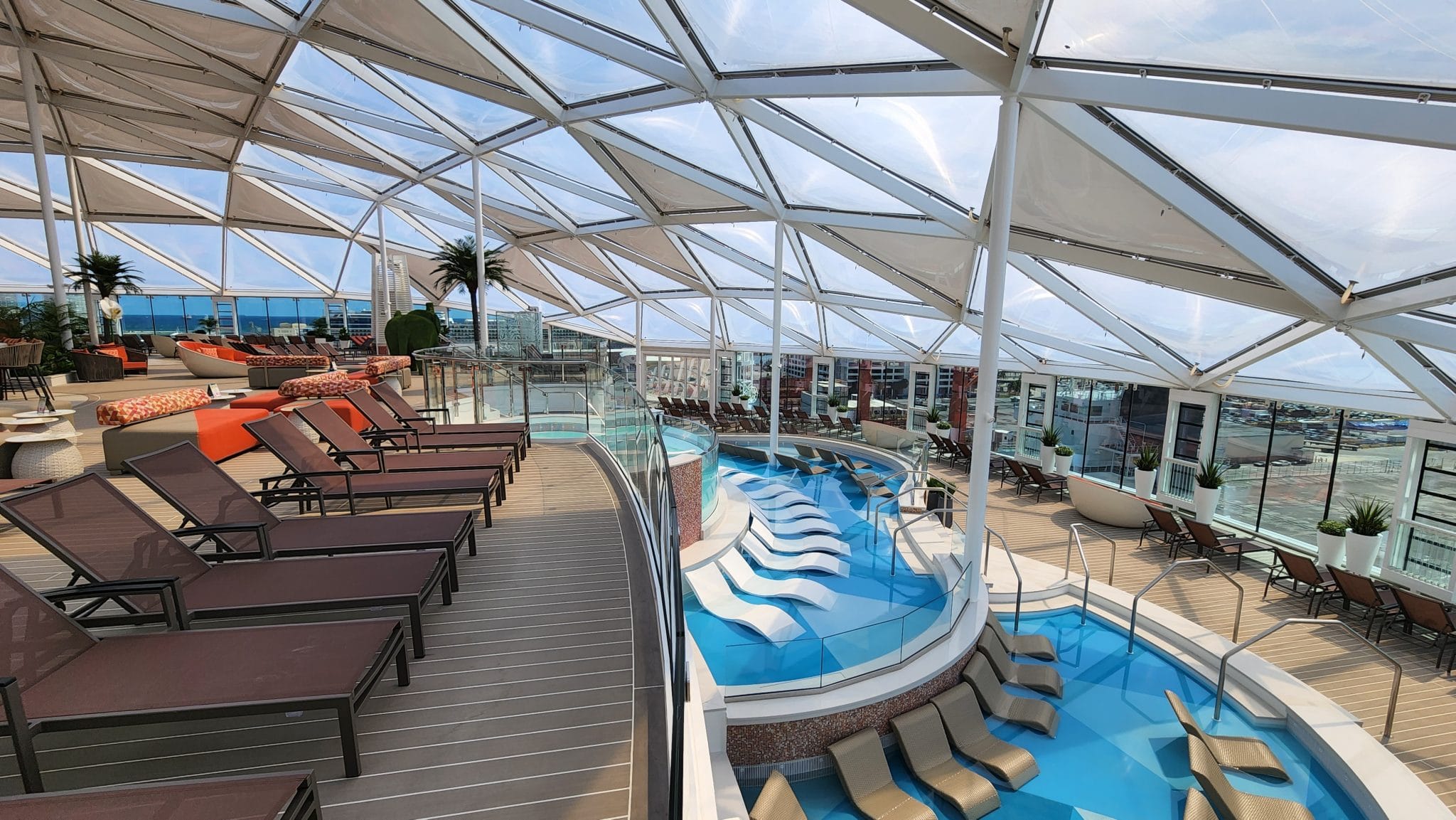 The sundeck also has a large hot tub with glass walls overlooking the ship. I mean, how cool is that? 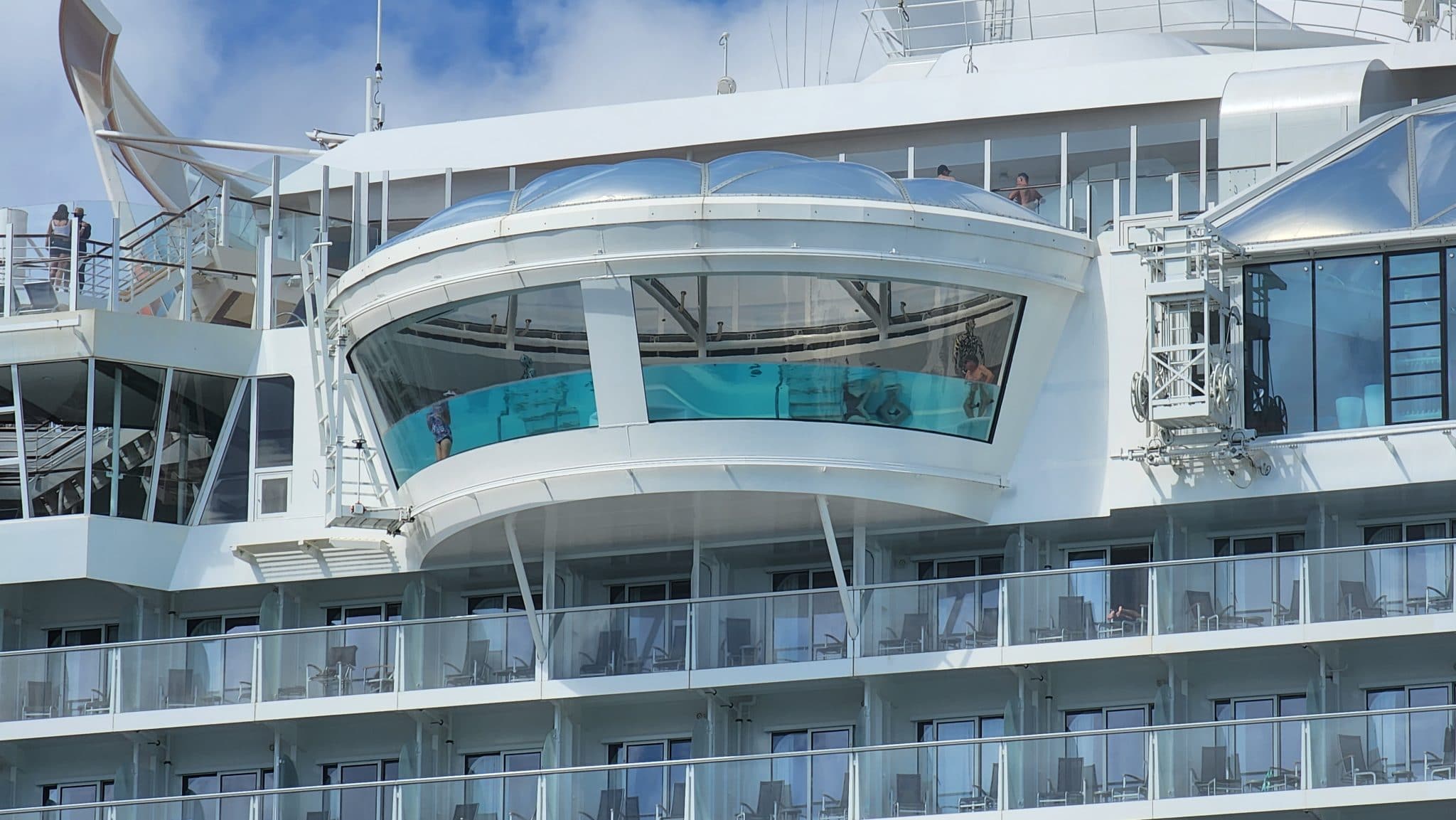 Boardwalk/Central Park – If you’ve never sailed on one of Royal Caribbean’s Oasis-class cruise ships, there are two areas of the ship unlike anything else offered at sea.

Central Park is located on deck 8 amidships and is full of real trees and plants. There are several restaurants and shops in this area. It quickly became my favorite area of ​​the ship at night and felt like I wasn’t even on a cruise ship. It was so peaceful, it’s the perfect place to sit and have a drink or enjoy one of the ship’s specialty dining options. 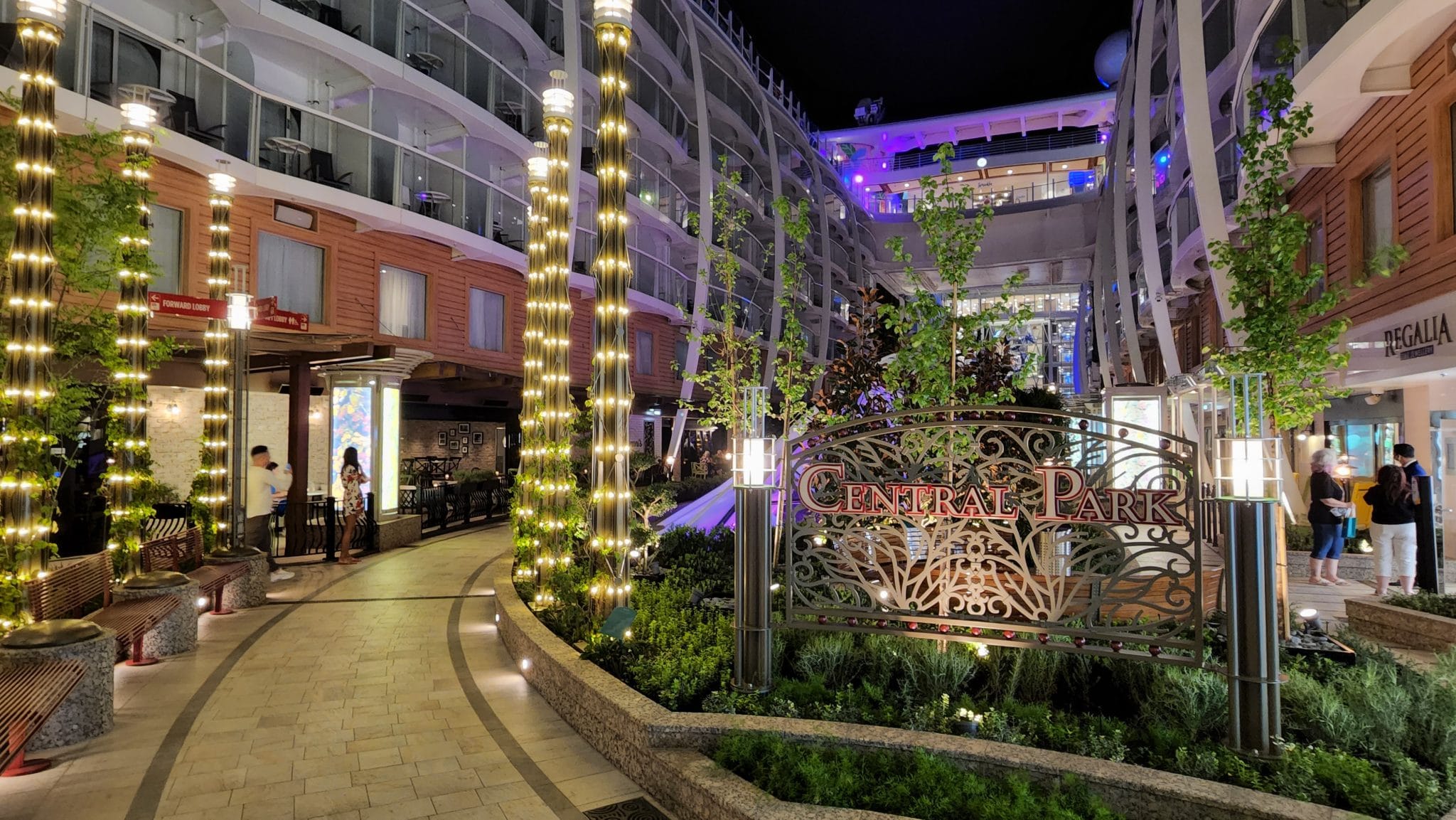 Boardwalk is located at the back of Wonder of the Seas and has all the Coney Island vibes. There’s a carousel, huge sports bar, Johnny Rockets, candy store, hot dog stand, and the Aqua Theater.

See cruise prices on Wonder of the Seas 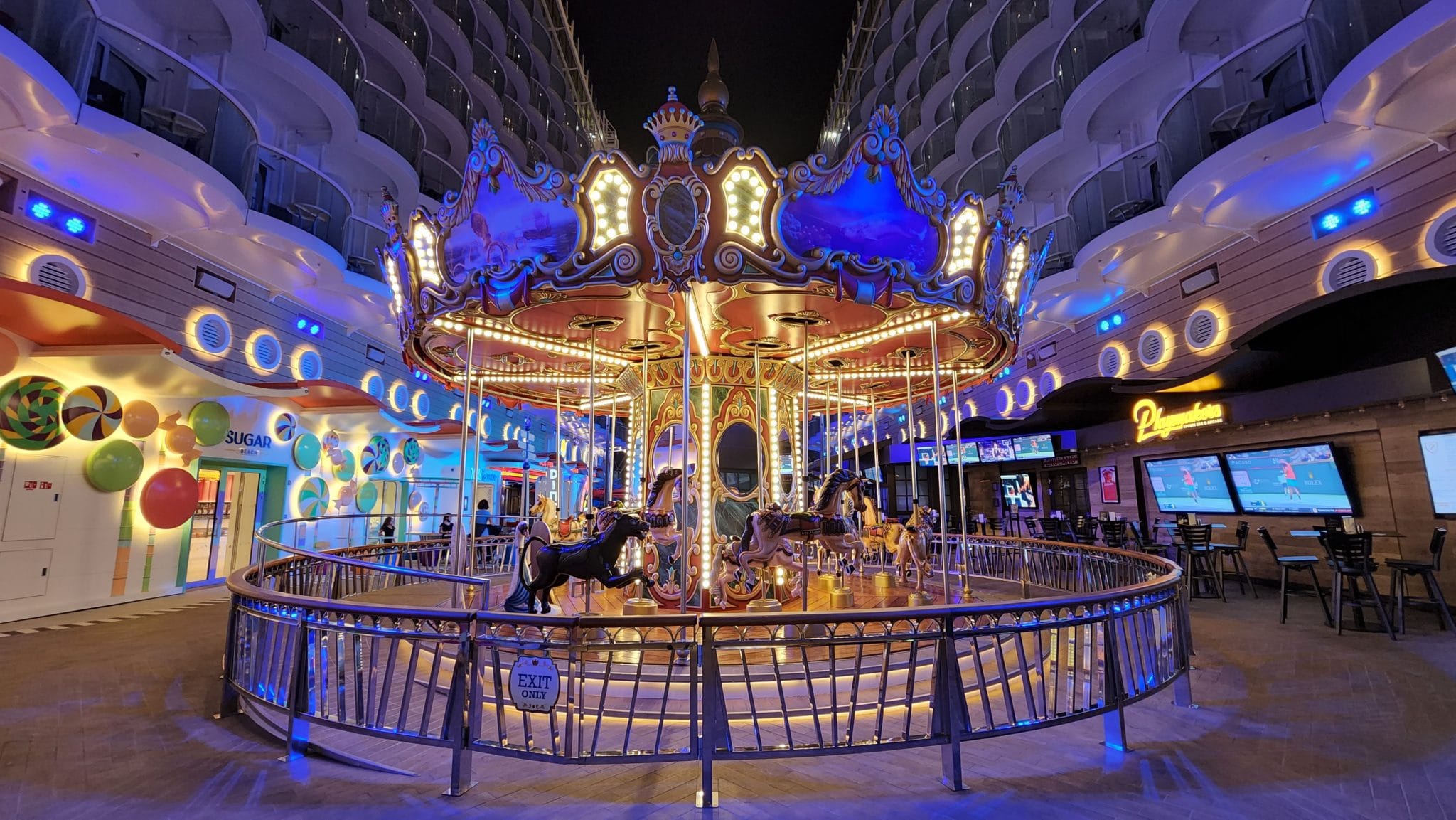 The Aqua Theater offers unique water, light and diving shows. It’s truly amazing the shows that Royal Caribbean offers in this area and something you won’t find on any other class of cruise ship in the world.

Entertainment – Royal Caribbean offers shows in three different parts of the ship. They have the standard main theater shows, ice skating shows in Studio B (yes there is an ice rink on board) and in the Aqua Theater. They also brought several comedians throughout the cruise.

There really is something for everyone, including laser tag.

Itinerary – Our cruise departed from Fort. Lauderdale, Florida and visited San Juan, Nassau, and the cruise line’s two private cruise ports/islands, Labadee and CocoCay. Having a cruise that visited both Labadee and CocoCay was really nice.

I did the zip line on Labadee and it was the highlight of my day. It’s the longest zip line over water in the world and I can’t wait to do it again on my next visit there.

You can watch a video of me ziplining down below.

Here are some tips I want to share with you that I learned after my week aboard Wonder of the Seas.

I discovered the Park Cafe for breakfast towards the end of the cruise and wished I had found it sooner.

The Bionic Bar, robots that make drinks, has a nice selection of soft drinks you can order.

The WiFi was good, it went out several times for a few minutes but I was able to work all week on it without any issues.

Royal Caribbean has added a TV screen on the pool deck for the first time on an Oasis-class ship. The best place to watch TV is near the astronaut.

Speaking of astronauts, there are three around the ship. I hope you have fun finding them on your cruise.

Since the ship was originally going to sail in Asia, there is a karaoke room which was great fun at night.

In the spa, there is a juice bar which is included in the drinks packages.

At night, there is live music all around the ship, including at Boleros, Schooner Bar, Mason Jar, Central Park and Music Hall.

I loved Wonder of the Seas so much that I am considering booking my family on the ship this year. Like I said earlier, this is pretty much the perfect cruiser for families.

A modern-day ‘ghost ship’, which ran aground on rocks along the Cork coast in 2020, has split in two after being repeatedly battered during successive stormy spells this year. MV Alta was beached at Ballyandreane in Ballycotton, East Cork on February 16, 2020, during Storm Dennis. After being abandoned by her 10-man crew during a […]

Breadcrumb Links Local news Captain Felino D’Souza was awarded a golden-headed cane, a tradition dating back over 180 years. Author of the article: Montreal Gazette Captain Felino D’Souza won the gold-headed cane. The Québec Express container ship was the first ocean-going vessel to cross the downstream limit of the Port of Montreal in 2022. Mont […]

The real captain of the good ship Giants? Belt or Crawford, his name is Brandon

Is he the man who anchors the defense from midfield? Or the man who anchors his boat in the middle of the field? Brandon Crawford and Brandon Belt enjoy such a good relationship as the two players with the Giants’ most serving time and the only remaining championship-era ties that Belt thought it would be […]